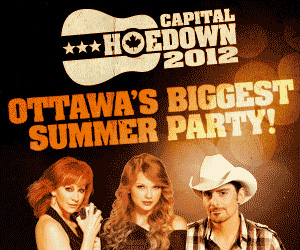 Good news, Canadian fans! It was announced that Taylor will be playing at the Capital Hoedown Country Music Festival in Ottawa, Ontario on August 11th, 2012. She joins Reba, Brad Paisley, and The Band Perry in performing at the three-day festival. Tickets go on pre-sale Tuesday, November 29th and regular sale begins on Wednesday, November 30th, so make sure to get your tickets! Visit the official Capital Hoedown site for more information about tickets and to see the rest of the lineup!


Attention, country music fans! Mark your calendars; the lineup for Capital Hoedown 2012 has been announced and it’s bigger and better than ever.

“Our first year, we had traditional country artists, and last year, it was all new country,” says Denis Benoit, President and CEO of Concert International. “This year, what we’ve done is we’ve brought them both together.”

Making her only scheduled appearance in 2012 so far, Taylor Swift will perform at the third edition of Capital Hoedown, one of North America’s biggest country music festivals.

On a side note, I’d like to introduce myself. I’m Kp and one of the staff members over on the forum. I’ve been a member of the site for about 3 years now, so I’m honored to say that I’ll be helping out Sam and Hong keep up-to-date with news for a while. If you want to know more about me, head on over to the forum or check out my tumblr. I’m looking forward to the experience!

5 Comments on “Taylor Added To The Capital Hoedown Lineup”