Taylor to Be Honored at GLAAD’S Media Awards

Taylor has been announced as the honoree for the Vanguard Award at the 2020 GLAAD Awards! The award is given to those who have made a significant difference in promoting acceptance of LGBTQ people. The ceremony will be on April 16 in Los Angeles.

Taylor Swift is adhering to the wisdom of her 2019 pop song, “You Need to Calm Down.” Instead of getting mad, she’s getting GLAAD in 2020.

Swift will receive the Vanguard Award at the 31st Annual GLAAD Media Awards on April 16 at the Beverly Hilton in Los Angeles, while writer, director and producer Janet Mock (“Pose”) will receive the Stephen F. Kolzak Award.

“From boldly standing up against anti-LGBTQ elected officials to shining attention on the urgent need to protect LGBTQ people from discrimination through the Equality Act, Taylor Swift proudly uses her unique ability to influence pop culture [and] to promote LGBTQ acceptance,” GLAAD president and CEO Sarah Kate Ellis said. “In a time of political and cultural division, Taylor creates music that unites and calls on her massive fan following to speak up and call for change.”

Swift’s 2019 pop song “You Need to Calm Down” was an LGBTQ anthem with the lyrics “shade never made anybody less gay” and “why are you mad when you could be GLAAD” that debuted at No. 2 on the Billboard 100 in June.

Reaching beyond her music, Swift donated to the Tennessee Equality Project, an organization that rallied religious leaders to denounce anti-LGBTQ bills nicknamed the ‘Slate of Hate.’ She also wrote a letter to Tennessee senator Lamar Alexander on behalf of the LGBTQ community, seeking his support for the Equality Act, which would protect LGBTQ Americans from discrimination in employment and housing. “Let’s show our pride by demanding that, on a national level, our laws truly treat all of our citizens equally,” she wrote to her fans on a Change.org petition created to promote the Equality Act. 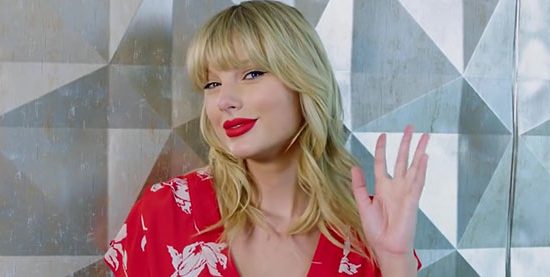