Taylor attended the 2014 Billboard Women in Music Luncheon in New York City today. She wore an Oscar de la Renta dress and Christian Louboutin shoes. Taylor also received the Billboard Woman of the Year award for the second time. Check out pictures in our gallery! You can also read the transcript of her speech and watch videos below!

Taylor Swift had a important message to get out when she recieved Billboard’s Woman of the Year honor — she’s continuing her fight to find a new way forward with respect to the industry, selling albums and streaming her music.

“Being named Billboard Woman of the Year for a second time is this amazing early birthday present,” Swift said in her opening remarks. “I turn 25 at midnight tonight, and I fully intend to to celebrate like it’s 1989.” After only polite audience laughter, she added, “I knew it was a bad joke when i wrote it, and I just did it anyway!”

“I’ve taken this year to stand up for my value as a songwriter, as a businesswoman and a content creator,” she explained. “I’m very well aware the music industry is changing, and it will continue to change. I’m open to that change and progress. I’m not open to the financial model that is currently in place. I really believe that we in the music industry can work together to bond technology with integrity. And I think we can teach a younger generation about an investment in music, not just the ephemeral consumption of it. I think that there has to be a way for streaming or any future way we access music to fairly compensate the writers. 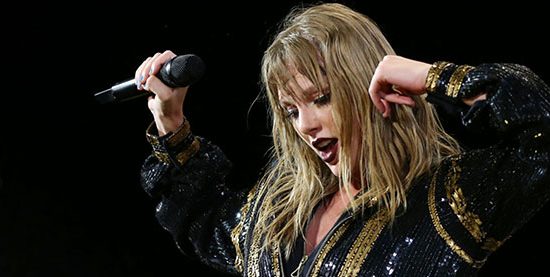