Taylor is the cover girl for the November issue of InStyle! She looks gorgeous on the cover and we can’t wait to see more photos from the photoshoot! Be sure to head over to our gallery to see the cover! 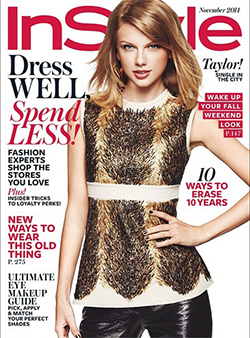 Taylor Swift is no stranger to photo shoots—particularly ones with InStyle. The November issue, available on newsstands and for digital download Oct. 17, marks the fourth time the singer adorns our cover, this time in a top, pants, and earrings by Louis Vuitton. (Previous looks included Burberry Prorsum in 2013, Fendi in 2011, and an Oscar de la Renta gown—straight off the runway—in 2009.)

“The fun thing about today was that they tried to steer clear of any look or any kind of vibe that we’ve previously gone for in the shoots,” Swift says in the behind-the-scenes video above. She may have arrived at N.Y.C.’s Milk Studios in a T by Anthropologie, but—as makeup artist Frank B. put it—she quickly transformed into a high-fashion model, showing off her serious side in a chain-mail dress by Mary Katrantzou and a stretch cady dress by Stella McCartney, among others. Her favorite? A “gorgeous, almost school-girl prep” dress with a glittery pleated panel by Marco de Vincenzo.

But her InStyle spreads aren’t the only things she’s taking in a new direction. Says the “Shake It Off” singer, “With the new album, I really wanted to make sure that it stood for something different … That was one of the main goals: making sure I don’t make the same album twice, and I didn’t with this one. It’s very much a brand-new endeavor.”